I'm starting this at a very unusual time in my life. A couple of months ago I hit the lowest point in my poker career, and over 15 years I’ve had no shortage of low points. When I had low points in the past, they would drive me just enough to get back on track. I'd have a couple of realizations about some things, or I'd make a couple of life changes, and those changes might last a month, or a week, or a day - however long it would take me to forget that brilliant insight I'd so feverishly scribbled down in a moment of clarity. Then I would slip and slip again, for months or years, until it was time to dig myself out again. This time turned out to be different. This time the bottom fell out from under me.

Ah, man. Deep breaths. Let me take a step back and give a little background on myself. I started playing poker professionally 15 years ago. I’d started college a few years earlier at the most perfect time you could possibly imagine, and by the end of my first week in the dorms I'd learned all about this yokel from Tennessee who'd just won the World Series. Pretty quickly I went from Moneymaker to dorm games to 2+2 to Empire Poker, a Party skin which has now apparently been defunct for 7 years. I still have an ancient-looking screenshot from my first triple-digit day there: 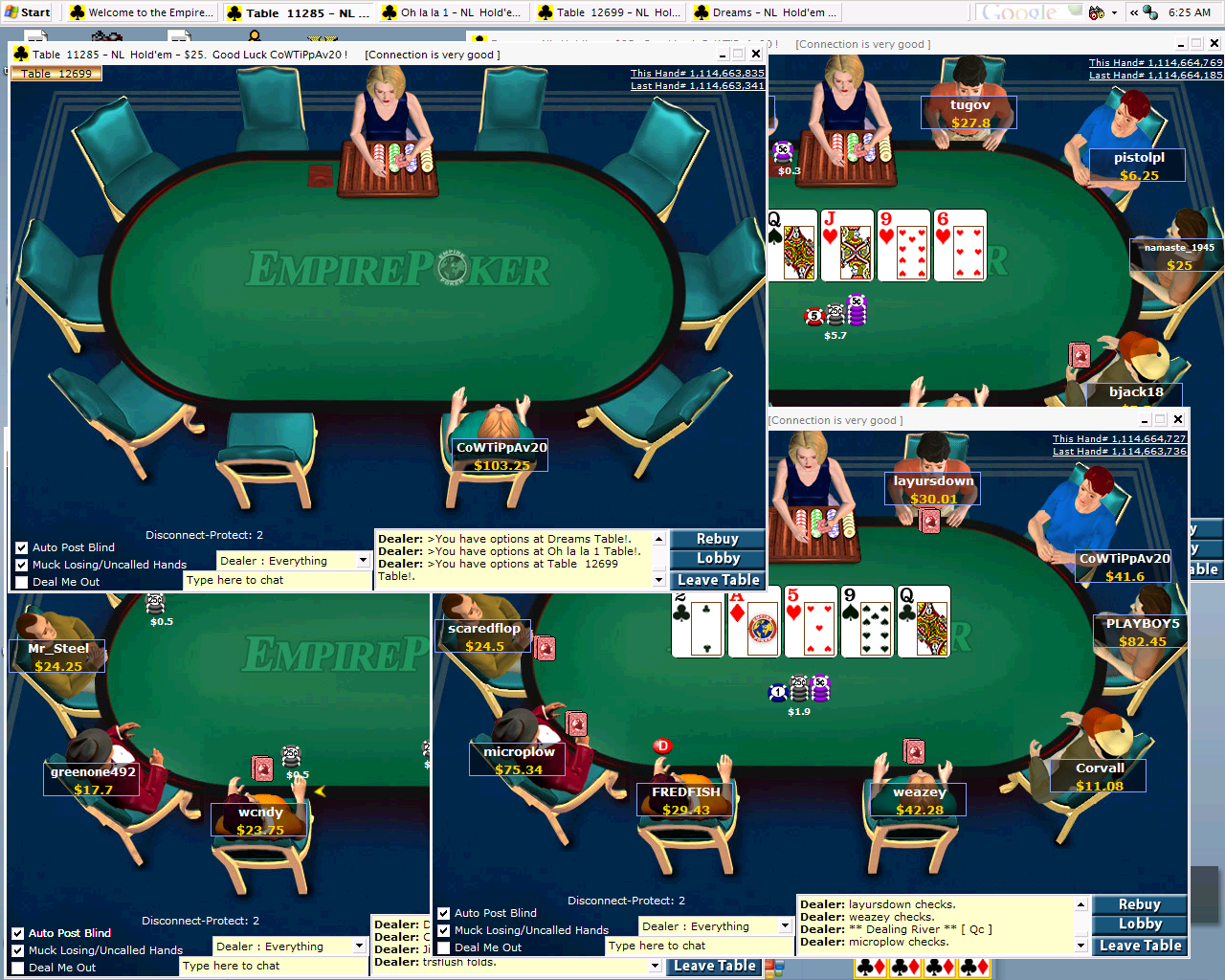 When I found out I could do it online, that was it for me. I already spent all my free time playing computer games, and what was this but almost that? It took a couple more years, but eventually I failed out of enough classes to turn pro. Since then, my poker journey has alternated between short bursts of extreme dedication and long periods of barely skating by, often not playing for months at a time. I rarely went above 400nl and rarely below 200nl. I've always wanted more because I always thought I was capable of more, but I was only ever willing to challenge myself when it was absolutely necessary.

This wasn’t just with poker. This was my whole life cycle. There came to be such a feeling of familiarity with it, and with every iteration I became more terrified to leave it. It felt as if it gave my life meaning where there was none. If I was low, it actually felt important that I find a way out, and the lower I was, the greater that sense of importance. Sometimes that meant working towards it in a somewhat healthy way. More often, it meant simply choosing to be high, from one thing or another.

I’m working through Tommy Angelo’s book Painless Poker right now. In it, he writes about 7 archetypal players who teleport to him for help at their absolute lowest. “Moments ago, each of you was experiencing the most painful moment of your poker life. Here, we will examine pain, and we will make it stop.” Well, I had my moment a couple of months ago.

In the year leading up to this, I barely played at all. I kept putting it off, reminding myself that this has happened plenty of times in the past. Sure, never really to this degree, but I knew that whenever I felt genuine pressure, I’d always been able to rely on this other side of me that kicks in. It’s a side that knows how to focus and perform and get things done. It always pulls me back from the financial brink, but it also completely takes me over. When it’s there, it feels as if everything in my life and experience is subsumed, and it drives me unrelentingly until, essentially, I feel safe again.

For a long time I didn’t have a name for it, but several years ago I read a book that felt like it described it to a tee. Armor by John Steakley. The main character, Felix, is a foot soldier in an intergalactic war against a vastly more powerful insect race. Very Starship Troopers. Every time Felix is deployed, he’s terrified and absolutely certain he’s about to die, but every time the battle begins, he feels this other side emerge and consume him, a side he calls The Engine. As his fellow soldiers are slaughtered around him, Felix feels all his fear and horror drowned out by The Engine, and he fights as if possessed, calculating and executing over and over again, until finally he’s safe.

I was trembling when I first read it. I’m trembling writing about it now. This thing has been with me my entire life. In one way or another it feels like it’s framed everything I’ve ever done, even when it’s far away. I saw it the most in gaming, which I used to do a lot of, which I had to give up entirely. It’s thrown me back into addiction more times than I can count. I also tried to use it, and when it came to poker, it always felt as if it saved me. Paint myself into a corner and let The Engine take over.

A few months ago, I was ready for it to begin. I’d painted myself into an even smaller corner this time. I was feeling even more financial pressure than usual, feeling even more inadequate and broken and fucked. The more I thought about that, the more I felt that hateful intensity burn inside me.

And so it began.

As I keep going, I feel myself collapsing. What’s more, I’d been feeling some physical pain creeping up on me, and on that day it reached a crescendo. Pain starts violently shooting up my arm all the way to my elbow, plus an entirely separate pain is radiating all through my back. I’ve dealt with back pain the past couple of years, but never like this, and what seemed like full-on carpal tunnel had exploded out of nowhere. I couldn’t even hold the mouse, and I still tried to keep going, moving it around with just the tips of my fingers. Soon I felt half my body on a bed of needles, and I had to stop. In that moment, I saw very clearly that it was this cycle, compounded over decades, causing this pain. I was destroying my body. I realized I had no choice but to stop, that my body would literally not let me do otherwise. For the first time ever, The Engine was failing me.

I stopped, went to my bedroom, fell to the floor, and had my moment. I've never felt so helpless in my life. I never realized how much I was relying on this thing, this churning force always lurking in the wings, always promising to sweep me up whenever I needed it. I never realized how deeply terrified I’d been of failure and vulnerability and imperfection. I never realized how expertly I'd learned to protect myself. I saw all my years of gaming, that breathless drive that would consume me for months on end until I reached the top or imploded. I saw my years in school, the way I'd either sacrifice everything for straight As or brag to myself about doing alright despite never going to class. I saw my poker career, how I never came to terms with all its unavoidable difficulty - downswings, mistakes, shortcomings - and how tirelessly I ran from it all. All these years, I had this secret guardian, this thing that made me inevitably great, and it never mattered how severely I neglected everything else in my life. I always had The Engine. Stripped of its power, I just laid there and cried.

That, uh... left an impression. Well, that changed me. The next day I went sober and started meditating and journaling daily. It's been an absolute trip since, and now I’m feeling incredibly grateful for the experience. There are still plenty of hard hours and days, but I feel genuinely happy for what might be the first time in my life.

I still have enough of a bankroll, thankfully, but I feel very much like I'm starting from the ground up. I'm learning a new way to approach everything in life, including poker. I’ve moved down in stakes. I'm taking things slowly and being very patient with myself. I'm being observant and honest. If I see an old habit taking over, I stop playing for a minute or an hour, however long it takes to pay attention to and understand what's happening. I have to, otherwise I get swept up again. I'm very, very experienced at getting swept up.

I have mixed feelings about sharing results – it’s easy for me to get attached to them - but I figured I’d go ahead and share my graph on the year since it feels like it captures this whole blessed catastrophe. 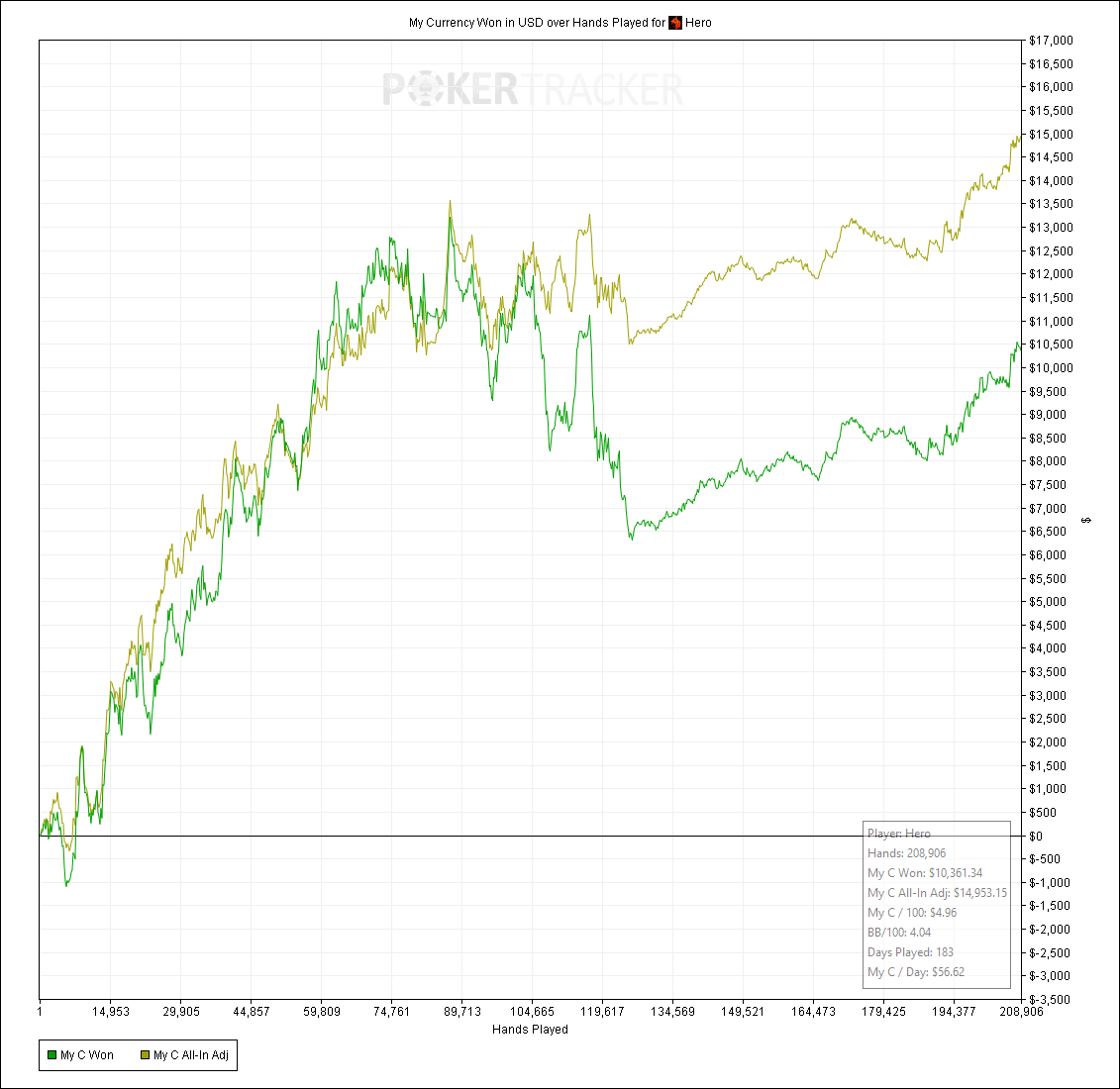 My main hope with this blog is that it resonates with someone. I’d love to meet people who also want to explore and talk about this stuff. I'm focusing a lot more on myself than the technical side of my game right now, but I *do* love that stuff too, so some of that'll be in here too. Hey, I found Zenith, right? or as I like to say… Zenith found me, man. Beyond that, who knows? I could start writing about my group of hot 30-something friends and our wild sexual misadventures in the City.

Hope you stick around.
Top

Re: The Demon-Haunted World

Great stuff. I look forward to more from you
The deck owes you nothing.
Top

Re: The Demon-Haunted World

Great story sir. Well, more an interesting read I guess and given no update for 4 months I hope you're still doing well
Top
Post Reply
3 posts • Page 1 of 1